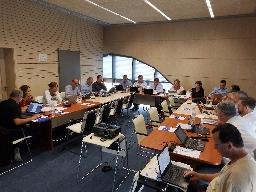 The Steering Committee of RIS COMEX project gathered in Ruse by invitation of BPI Co.

The fourth meeting of the RIS COMEX Steering Committee has been successfully completed. In the capacity of beneficiary Bulgarian Ports Infrastructure Company (BPI Co.) hosted the event. The working meeting was held in the period of June 27-28, 2018 in the building of RIS Centre Ruse.

Within the event a project implementation plan was proposed for approval and the pending actions were discussed. Final versions of the defined corridor services were adopted and the future system architecture of the various services was discussed. The Belgian web portal VISURIS was also presented as the basis for creating a pan-European server with a single database for different systems.

The RIS COMEX project is funded by the Connecting Europe facility and has many beneficiaries. It is directed towards the definition, implementation and sustainable functioning of corridor RIS services as a result of the outputs of the CoRISMa surveys. The scope of the project covers a total of 13 European countries, with 15 partners joining forces under the coordination of the Austrian Waterway Administration /Viadonau/ with the overall goal of implementing corridor RIS services in Europe. The project started in 2016 and will continue until the end of 2020.