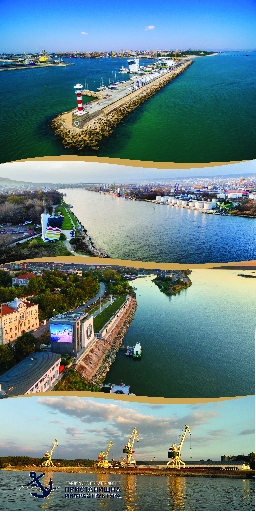 Successes on both river and sea mark 2019 for BPI Co.

The last days of the year coming to an endare are always a reason to make a balance. Challenges overcame, goals  attained and a number of completed projects both on the river and at sea mark 2019 for Bulgarian Ports Infrastructure Co.

For several years now, upon entering the city of Ruse, we have been greeted by the lights of the building of the River Infromation Centre, where all the control over the vessel traffic on the Danube River is focused. At the beginning of the year, EU Commissioner for Digital Economy and Digital Society Maria Gabriel visited the RIS Centre – Ruse and was impressed by the River Infromation System BULRIS, built by BPI Co. She praised the level of digitalization of port services in the country and the technological means of the river information system in the Bulgarian stretch of the Danube River.

In 2019, over 17 000 records were processed on the One-Stop-Shop system, with the heavisest traffic on the Danube from April to October. Numerous measurement activities have been carried out in port waters, and 25 precision hydrographic charts have been produced to serve for the safe and trouble-free navigation.

Whithin the RIS COMEX project, BPI Co. experts performed data submission from the Automatic Identification System /AIS/, maintained by BULRIS, to a central pan-European AIS server that aggregates all data from the project partner countries.  Major systems such as NtS, river SW, and ERI have been successfully updated.

At the beginning of the year, the Director General of BPI Co. Anguel Zabourtov became a member of the First Danube Ports Network Advisory Group, whose aim is to contribute to a more dynamic, sustainable and modern port network in the Danube region.

Bulgarian Ports Infrastructure Co. organized River Exhibition in Ruse, which drew attention to the benefits of freight transport by water, and in Vienna, Austria, the Director of the Project Management Directorate at BPI Co. Anna Natova signed a key document for the sustainable development of the Danube region.

The year was also strong in terms of BPI Co. activities in seaports. A number of infrastructure improvements in Burgas and Varna mark 2019, as well as an enhancement in the level of digitalization of port services in Bulgaria.

Bulgarian Ports Infrastructure Co. launched high-tech advanced security systems at the port terminals Varna-East, Varna-West and Burgas-East 1. The established systems based on modern technologies, control the risk and significantly increase the security of the sea ports in Bulgaria, allowing continuous video surveillance for the protection of the critical infrastructure.

In the meantime, BPI Co. has modernized the area of the Passenger Terminal-Varna. The pavements in the area of the 3rd, 4th and 5th berths have been restored, new cable routes, street lighting, portals and access control systems, etc were built. The region of Varna West port terminal has also been improved and modernized.

In Burgas the area around the 3rd and 4th berths at the Burgas-East 1 terminal was developed. Thanks to this, a complex urbanized environment and necessary infrastructure for access to Magazia 1, Passenger Terminal and the Yacht Club Port Burgas have already been created, as well as  to the newly constructed sites in the region of the Public Access Area.

The construction of the Congress, the Black Sea Control and Research Centre, which is about to be officially opened in the new year, has been completed. In addition to contributing significantly to the development of congress tourism in Bulgaria, the modern building will be used throughout the year also as a venue for exhibitions, concerts, attractions and various educational events.

At the end of the year, the International Harbour Masters’ Association (IHMA) accepted Bulgarian Ports Infrastructure Co. as a full member. Thus, our country already has a representative in the prestigious World Association, which brings together the harbour masters and institutions responsible for the control of maritime operations in the port.

The news of IHMA membership came just after the country officially celebrated the 20th Anniversary of the establishment of vessel traffic management and shipping information services in Bulgaria. The event brought together representatives of the largest Bulgarian and world organizations in the maritime industry in Varna, and the Director General Anguel Zabourtov received the distinction for successfully managing the ship traffic personally from the Varna Mayor Ivan Portnih.

Two picturesque photographs of the projects realized by BPI Co. on successfully implemented European projects were awarded in the European Commission competition Europe in My Region. On the postcards shine the Coastal Centre for Vessel Traffic Management and Information Services in Burgas, built within the framework of the VTMIS project, and the River Infromation Centre in Ruse, built on the project Establishment of River Infromation System on the Bulgarian Stretch of the Danube River – BULRIS. At the photo exhibition for embelamatic places in Varna, entitled See Varna, glows the landmark building of BPI Co. Seafarers House.

The year that is coming is an occasion for new goals, new aspirations and upgrading the achievements. In this line of thought, 2020 will again be marked by hard work and new challenges. For the Bulgarian Ports Infrsatructure Co. the new year will be even more special than the old one, because the company will celebrate 15 years since its establishment.